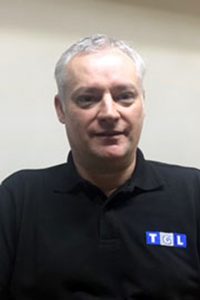 After leaving school Tony started a 5 year engineering apprenticeship with Overlander Trailers. Initially starting at the very bottom Tony progressed through the ranks and became the Company’s Technical Service Engineer.

After 12 years Tony left Overlander and joined M&G Trailers as an Assistant Production Manager. M&G at the time where one of the biggest trailer manufacturers in the UK.

His primary function was managing the fitting shop and the 20 staff that worked in it. Tony worked there for 14 years, until he was offered the opportunity to go back to Overlander Trailers as production director, except this time he was responsible for whole production facility and the 65 production staff working there. A role he excelled in.

Tony worked there for a further 4 years developing his production, man management and business skills. When the owner decided to sell up and move back to Canada, Tony was quickly approached by SDC Trailers, the UK’s biggest trailer builder at the time. Based in Northern Ireland the company had a body assembly plant in Mansfield, and he was offered the job of managing that facility. In total he had over 70 production staff directly reporting to him and had the responsibility for maintaining production output, controlling quality and engineering. Tony worked there for 3 years travelling and living away from home until he was asked to move to Ireland with the intention of managing the main trailer plant but with firm family ties here in the UK, Tony had to turn the offer down.

It was during this period that Tony was approached by Mike Grant MD of Tube Gear Ltd (TGL) who was seeking to employ an industry specialist engineer with a broad scope in manufacturing trailers, whom he needed to develop new and existing products for both TGL and his newly acquired company Vernon Developments.

Tony took the opportunity offered by Mike and hasn’t looked back. Not only has he been able to adapt and use his production knowledge to great benefit to the company, he has also increased his skill base to become proficient in areas such as procurement, quality management systems and accounting.

Tony’s main strengths include varied industry specific manufacturing experience and the in-depth knowledge of the industry he’s grown up in, and people that work in it enabling him to build up a wide and varied number of contacts in the truck & trailer industry.

Over the years Tony has developed excellent man management skills, fostering cooperation and getting results from those that work with him as part of a team.